We have had a busy few months here at the Support Group. On Friday 22nd February we welcomed over 65 Friends and Volunteers to the annual Blackdown Support Group Cream Tea, held this year at Hemyock Parish Hall. This event is our way of saying a heart felt thank you to the people who help fund our services by donating to us as Friends of the BSG and those who do so much to support our community by working voluntarily for us as drivers, befrienders, lunch club helpers, advocates, mentors and in many other ways.

On Friday March 15 we welcomed the Avon and Somerset Constabulary Male Voice Choir and flautist Michelle Krawiec to St Mary’s Church for a fundraising concert in aid of the BSG. Despite the inclement weather there was an excellent turnout and the audience enjoyed a varied and uplifting programme of old favourites and less familiar pieces. 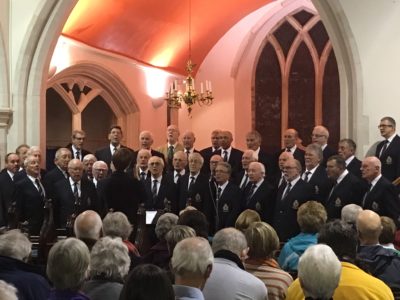 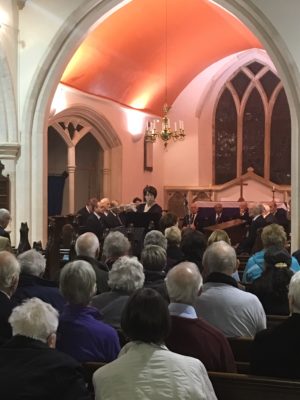 Particular highlights included the oldest choir member, 92 year old George, reciting an atmospheric excerpt from Under Milk Wood by Dylan Thomas with the low hum of the choir to accompany him. The choir also welcomed BSG Trustee and former choir member David Corden to join them for the last few songs as a guest. Well done and huge thanks to David for his singing and all his hard work organising this event.

The Support Group has a bric-a-brac stall at Churchinford market on the first Saturday of each month. If you are in the area pop along and take a look. If you have anything we may be able to sell to raise funds, either take it along to the market or drop it into the office at the Hemyock surgery. (Unfortunately we are unable to accept electrical items).

Around 50 friends of the Blackdown Support Group turned out to the AGM, which this year was held at the Throgmorton Hall in Dunkeswell – this despite the fact that England were playing that evening in the semi final of the FIFA World Cup!!!!

This year was the final AGM for our Chair, Sarah Folland; it does not seem possible that she was elected 3 years ago.  Sarah has had a very successful, although sometimes demanding time overseeing the running of the charity, and has had some challenging issues, all of which were dealt with in her usual calm manner.  Heather Stallard proposed a vote of thanks to Sarah for all her hard work over the last 3 years.  Sarah has said that she will remain on the board as a Trustee and will occupy the post of Vice-Chair for the next 12 months to help ease the new Chair (elected at the next Trustees meeting) into the role.

We also said goodbye to our Hon. Treasurer for many years, David Gollin.  David’s hard work and diligence have resulted in healthy reserves which will hopefully stand us in good stead as the belt of austerity continues to tighten around the voluntary sector.  Sarah paid tribute to David’s commitment and support for the BSG and made a presentation on behalf of the Trustees.

Sarah also paid tribute to Witek Nowosielski who had carried out a considerable amount of work on policies before standing down as Vice-Chair and Trustee at the end of 2017.

We welcomed Nicky Summerfield to the meeting; Nicky stepped in to look after our finances following the resignation of David Gollin, and was formally elected into the role of Hon. Treasurer at this meeting.  Also, Rob Cadwallader of Milsted Langdon, Chartered Accountants, who has taken over the role of Auditor of our accounts.  Sarah recognised the hours given voluntarily in this role.

David Major – Trustee, has taken over the supervision of our investment accounts.

Finally, Karen Button, Practice Manager, paid tribute to the work of the BSG on behalf of the Blackdowns Practice.

Following the business of the meeting we were entertained to a musical interlude by the Dunkeswell Hand Bell Ringers, followed by a hilarious rendition of Pam Eyres’ poem, ‘The Dolly on the Dustcart’ by one of the ringers, Babs Groom.  The evening ended with the traditional raffle, wine and cheese.